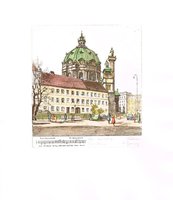 Vienna-Wieden, Karlsplatz. - In 1825 and 1826 the composer lived in the so-called "Fruwirthaus" next to Karlskirche church, where Johann Fruwirt's gun factory was located. The building captured in the picture by the artist had to make way for an office building in 1971. Among other works, Schubert wrote the "Deutsche Messe" ("German Mass", D 872) here, which was premiered in the Karlskirche. The musical quotation shows the beginning of "Das Wandern" ("Wandering"), the first song in the cycle "Die schöne Müllerin" (op. 25, D 795) composed in 1823 after poems by Wilhelm Müller: "Das Wandern ist des Müllers Lust, das Wandern" ("To wander is the miller's delight, to wander").